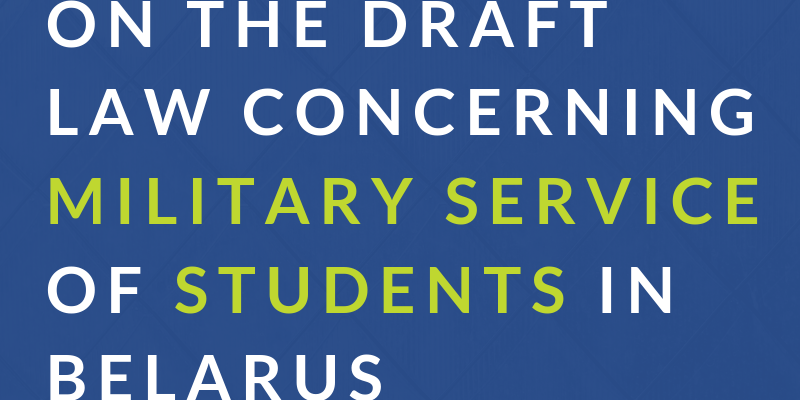 Statement on the new draft law for military service in Belarus

Belarus, 28th June 2019: The House of Representatives in Belarus adopted a draft law “On Amendment to the Laws on the Effective Functioning of the State Military Organization” which was developed and proposed by the Ministry of Defence. By effect of the draft law, study-linked deferment will only be given once for the completion of undergraduate studies. This means that post-college training and further education at the Masters level will not be possible without completing a mandatory 1 – 1.5 years of army service, likely to result in a 2-year study gap.

While recognizing that conscription still exists in many European countries, the European Students’ Union in solidarity with the Belarusian Students’ Association (BSA) express their concern towards the personal freedom and development of men of military age (1), the integrity and welfare of the conscripts during service (2) and their ability to return to studies upon finishing their military term.

Restrictions to and lack of opportunities for self-development during army service impede on conscripts’ progression of knowledge and skills that may later hinder the return to or the attainment of higher education studies post-service. Despite the efforts being made to eradicate hazing (2,3), psychological pressure and other forms of bullying (based mostly on pervasive internal hierarchies), still pose a serious threat to the physical and mental health of those serving.

Irrespective of national or ideological principles, military conscription (when and where it exists) should always safeguard the integrity and personal freedom of all those serving. Furthermore, in light of the government’s commitment to Belarus becoming a full participant within the European Higher Education Area (EHEA) and thus contributors to European knowledge-based societies and economies, due process of the draft law should ensure that the attainment of higher education of male students of military age is not impeded through conscription. It is within their right, as stated in ESU’s Students’ Rights Charter, for students to progress between the three-cycle system of higher education, thus conditions within conscription that deter this progression (beyond the fulfilment of national service) are considered in violation of students’ rights.

On behalf of the Executive Committee of the European Students’ Union