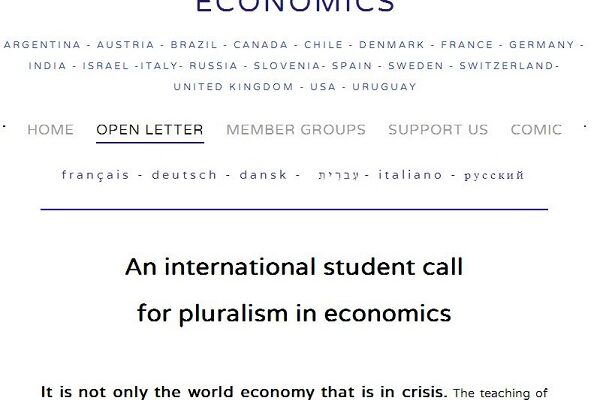 ESU supports the International Student Initiative for Pluralism in Economics

BRUSSELS – In the wake of the global financial crisis, many students in economics have expressed their discontent with their education. The European Students Union (ESU) supports the aims presented by the International Student Initiative for Pluralist Economics (ISIPE), which now gathers 65 student groups demanding pluralism in economics education.

The ISIPE group claims that theoretical pluralism should exist amongst the different traditions of economics; methodological pluralism between quantitative and qualitative methods as well as towards reflexive sub-disciplines of economics such as history of economic thought and economic epistemology; and, pluralism towards the other social sciences that is interdisciplinary.

ESU supports ISIPE’s members that strongly believe that pluralism will give students in economics the tools to deal with challenges of the twenty-first century that education in economics does not currently address. Better adequacy between the education and the students’ environment, which provide interdisciplinary and transferrable skills, are core to ESU’s fight for better quality education. ESU encourages all students and members of society to show their support to the ISIPE’s initiative by joining the movement or by signing up to it on its website http://www.isipe.net/supportus/

A global student initiative with the support from society at large

Such a wide adherence from students all over the world shows how much economics education is a global issue. The student initiatives involved in ISIPE wrote a global tribune that was published simultaneously in the same week in a dozen of countries. This tribune quickly attracted a wide media attention (http://www.isipe.net/press/ ) and gathered more than 2000 supports from established economists including Thomas Piketty, Ha-Joon Chang and Katarina Juselius, individual students in economics, professional economists organisations and think thanks and from citizens. The fact that ISIPE receives such a wide support, not only from the academic world but also from the wider society shows that this fight goes far beyond the university walls (http://www.isipe.net/supportus/).

Students’ discontentment in economics education is not new, from the Australian 1970s movement for political economy to the French movement for a post-autistic (sic) economics in the early 2000s that quickly spread in other countries such as Germany, economics education have always been controversial. The crisis has made such disenchantment bigger than ever and students soon realised they were not taught the right tools to understand the current economic environment and were not able to respond correctly to the economic crisis.