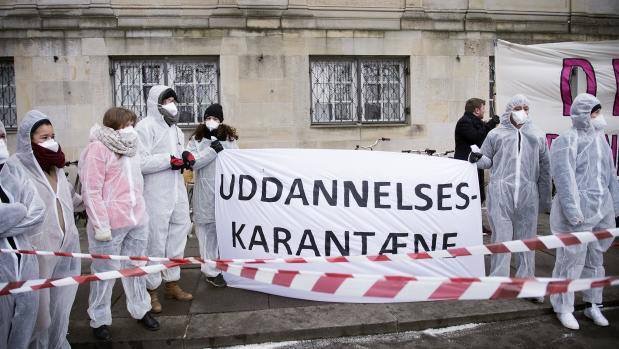 The majority of representatives in the Danish parliament have passed a law this past December, popularly known as “uddannelsesloftet” or “education ceiling”. This law denies students (with few exceptions) the possibility to pursue a second degree at the same level or lower than what one initially pursued. This means that, for instance, students with a graduate degree are not be able to take another masters degree and neither an undergraduate one, since the latter would count as a lower degree.

«ESU is convinced that no student should be punished for education earlier achieved and should have the right to achieve broader and better knowledge. This does not only have benefits for the individual, but also helps the students’ readiness for the fast changing challenges in our societies and economies. Furthermore, depriving students from additional education is contradicting the long standing paradigm  of life long learning, which is representing a broad agreement on the necessity of continuous learning.» says Lea Meister, President, European Students’ Union.

The motivations behind this law are mainly economical. The objective is to push students faster into the job market and to limit expenses by not covering the costs of a second degree. Despite the economic arguments behind it, the amount of money saved would be minimal, representing only a small percent of the total higher education budget. Also, the reform has the potential to increase the levels of drop outs.

Hundreds of students in Denmark could drop out

More recently, due to political pressures, the Government has decided to ‘soften’ the law by allowing graduates to follow a second degree, but no sooner than 6 years after graduation. This change does not, however, withdraw the additional barriers created when accessing education.

The European Students’ Union and the National Union of Students in Denmark (Danske Studerendes Fællesråd – DSF) strongly oppose this law. It threatens hundreds of students who are currently enrolled and were planning to have a second degree, to drop out. Even the government itself has estimated that 25% of students who are directly affected by this new law will quit their current education.

The law also threatens all those graduates who wish to specialize. This mostly affects students from professional education, whose paths have limited flexibility.

A direct attack on the benefits of multidisciplinarity

Finally, this law represents a direct attack against the benefits of multidisciplinarity and the principles of free access to education. The Danish government should focus on removing barriers to education, instead of reducing accessibility.

The European Students’ Union, commits its support and solidarity with the National Union on Students in Denmark (Danske Studerendes Fællesråd) in their struggle to abolish the law L69 on restriction of double education (Begrænsning af dobbeltuddannelse).