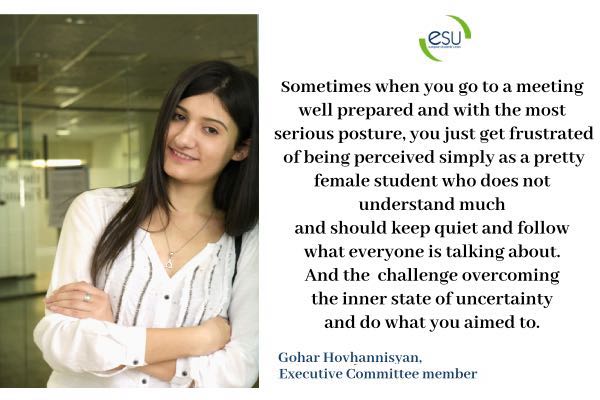 On 8 March 2018, The European Students’ Union (ESU) joined the worldwide campaign #PressforProgress to raise awareness following the publication of the World Economic Forum’s 2017 Global Gender Gap Report which shows that we are as far as 200 years from achieving gender parity. On the upside, we see a growing global movement striving for equality.

At ESU, we asked our female members to share with us their experiences as women within the student movement. We published their videos and quotes on our social media channels (Facebook, Twitter).

Caroline Sundberg, Vice president of ESU, talked about interruptions, withholding information and mansplaining in this video:

Members of the Executive Committee and other ESU members also participated in the campaign. Below you can see other examples:

Simona Gamonte, ESU’s Human Rights and Solidarity Coordinator, shared her story showing how she managed to overcome the challenges she faced as a woman coming from a minority background, to later become a human rights advocate.

The campaign reached over 14.000 people on our Facebook (using the hashtags #PressforProgress and #IWD2018) and achieved more than 8.000 impressions on Twitter.

The International Women’s Day has been observed since the early 1900’s as a global call for gender equality and a celebration of the social, economic, cultural and political achievements of women.

In 1913, 8 March was set as the official, global date of the International Women’s Day, but, it was not until 1975 that the United Nations celebrated this day for the first time.