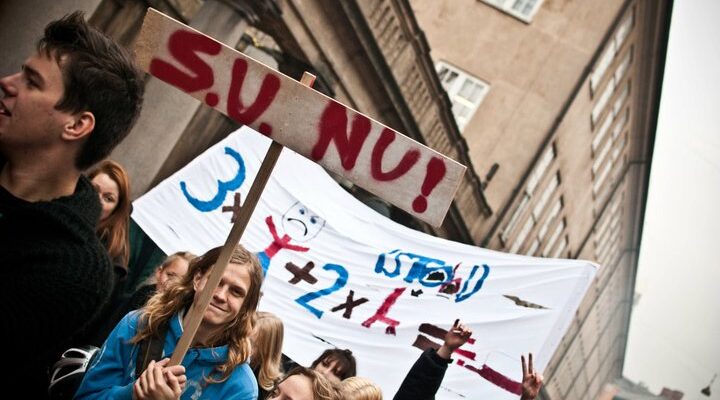 The social system for Danish students is in jeopardy

COPENHAGEN – Social mobility might be reduced and fewer students would complete their studies if proposed changes to the financial support system for students in Denmark will be adopted. These reforms introduced by Morten Østergaard, the Danish Minister for Higher Education, would hit those families especially hard that come from lower socio-economic backgrounds. They could have severely negative consequences for all students in secondary and tertiary education.

“This proposal is a real cut down on the student grant system, aiming at increasing state revenue by two billion DKK by 2020 and giving it to tax relief in the sector of trades and industries. All students will be affected by the reform, some more than others. This applies particularly to students that have a weaker background; such as students that take more time to decide their field of study, students that get sick, fail exams, students with kids or students with parents with less education,” says Jakob L. Ruggaard, President of the National Union of Students in Denmark (DSF).

Students’ representatives in Denmark have fought hard against the proposal that the Danish government coalition hopes to get approved before 1 March 2013 that would then be implemented steadily from 2014 to 2023. DSF has urged the government to withdraw the proposed changes and has planned demonstrations with fellow students in vocational and secondary education against the reforms.

“What students can do is to show their dissatisfaction and disappointment with the government and join in on the protests and preparations for protests that are happening right now all over the country. We encourage people to participate in a big demonstration march that we are organising in Copenhagen from the Town Square to Christiansborg Slotsplads on 28 February from 15 o’clock,” Ruggaard elaborates.

Wrong estimations used in the proposal

The government claims that the student support system costs too much and that Danes graduate too late. Therefore, it wants to reduce the grants paid out and introduce extra limitations to the system. This policy is in line with OECD’s recommendations to Danish authorities to replace student grants with loans. However, the average age of graduation in Denmark is one of the lowest when compared to the other Nordic states. Students on Master´s programmes prolong their time of study for various reasons. Many Master´s students in Denmark cannot finish their studies if they want to follow academic recommendations, such as going on exchange programmes, internships or take relevant courses at other institutions. If the grants would be cut, it would only take students more time to complete their degrees.

Should listen to students, rather than the OECD

The European Students’ Union (ESU) fully supports the statements issued by DSF and believes that students do not prolong their studies without a valid reason. “So far the Danish grant system has guaranteed a certain level of flexibility for the students, taking into account possible shifts in their personal lives, such as possible sicknesses and maternity leaves. What is more, those students that want to add more diversity to their learning experiences by participating in study periods abroad or internships, still encounter certain barriers when striving to get those additions recognised in their curricula. Therefore this is rather a structural, than a students´ problem, which in time prolongs their graduation period,” Karina Ufert, ESU´s Chairperson comments.

“It is also shocking, that the Danish government is keen on listening to neo-liberal advices found in a report from the international think-tank OECD, rather than the voices of its own students. It sends out worrying signals about the democratic state, where a large group of the society, consisting mainly of students and their parents, might have to face broken electoral promises,” Ufert emphasises.