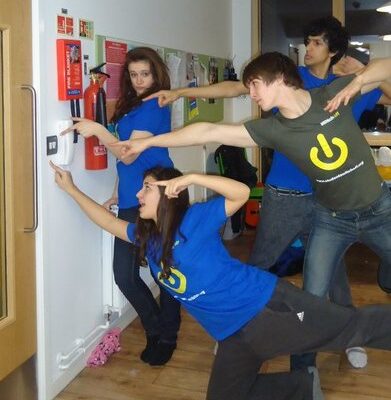 LONDON – Co-financed by the European Commission within the framework of the SAVES project, the Student Switch Off Campaign was launched in 5 European countries in September and October 2014.

Student Switch Off is an action aiming at promoting energy saving behavior among the students living in dormitories, first set up by the National Union of Students of United Kingdom (NUS UK). Participating dormitories are put in a competition to save the most energy by simple everyday actions, like putting a lid on a saucepan, switching off light when not used, avoiding boiling more water than needed or putting on a jumper instead of heating. Last academic year the campaign contributed to cutting 3.000 tonnes of carbon and saved the education sector £400.000.

The Student Switch Off Campaign aims not only at achieving valuable energy savings by students during their time spent in dormitories, but also at getting them into green energy-usage habits at the moment of a major lifestyle change. A study conducted by NUS UK prior to the launch of the campaign showed that the students moving into dormitories for the first time are usually not incentivized to save energy because the bills are often all-inclusive. Moreover, some students might feel

encouraged to use more energy than they need to get their money’s worth, which leads not only to the excessive energy usage in most of the dormitories, but also to instilling bad habits in young people, who will be hit by high electricity bills once they move to private accommodation. The Student Switch Off campaign shows students that saving energy can be fun. Students can participate in actions such as Facebook photo competitions and win prizes that range from cash and Ben &Jerry’s ice-cream to a dorm party.
The aim of the SAVES project, co-funded by the EU Intelligent Energy Europe (IEE) programme, is to expand the Student Switch Off initiative over Europe. In September and October 2014 the Student Switch Off campaign launched in 5 partner countries: UK, Lithuania, Sweden, Greece and Cyprus. 17

universities and dorm providers from the above mentioned countries are participating in the contest. Thanks to the smart data meters installed in all the participating halls, the project team will monitor students’ real energy usage and award prizes to the dormitories that achieve the most significant energy savings.

Throughout the academic years 2014/2015 and 2015/2016 the SAVES project is planning to engage over 50.000 students resulting in 8% energy saving each year and an improved environmental awareness.

Visit www.saves-project.eu to learn more about the project and discover the participating halls!