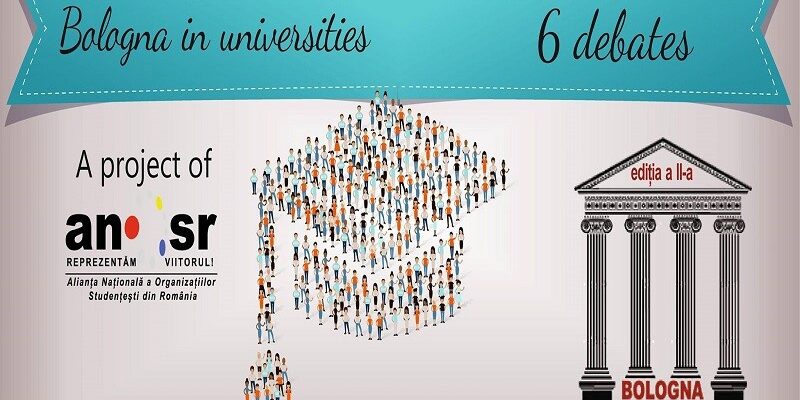 Students discuss the future of higher education in Romania

From March 25 to June 4, The National Alliance of Student Organizations in Romania (ANOSR) will hold 6 debates on topics of interest for the Romanian higher education system in 6 different cities (Timi?oara, Ia?i, Sibiu, Cluj-Napoca, Suceava, Alba Iulia), during the second edition of the Bologna in Universities project. These events are listed in the calendar of activities organised under the aegis of the National Debate for Education and Research – “Romania Educated”, conducted by the Presidential Administration. The conclusions of the debates, together with other studies and reports of ANOSR, will be discussed by student leaders from across the country in August, in Gala?i, at the Forum of Student Organizations in Romania (FOSR) and will be collected in a comprehensive report on the higher education system, which will be made public and submitted to decision-makers and to the Presidential Administration in order to develop a long-term vision on the national education and research system.

Bologna in Universities is an ANOSR project which aims to bring back in Romanian universities the discussions about the implementation of Bologna Process, both at national and at European level, as well as debates about the latest trends in education worldwide. Thus, through these events, ANOSR aims to identify, to question and to capitalize new visions on developing the Romanian educational system, both from students’ perspective as well as other stakeholders’ directly or indirectly involved in the educational process.

The themes of the debates for this year are:
1.    The financing of higher education in Romania – how much money are needed, what for and how should they be distributed?
2.    The culture, assessment and quality assurance in higher education – how do we make these processes more efficient and what is the students’ role in their implementation?
3.    Students’ rights – how do we strengthen the status of the student in the educational system?
4.    Social dimension of education – how do we make higher education accessible to all walks of life and how we adapt to demographic challenges?
5.    The international dimension of the higher education system – we do we have to do to be more visible in the European Higher Education Area?
6.    Student Centered Learning – how do we adapt the teaching-learning process to the needs of today’s society?
ANOSR invites students, teachers or any interested citizens to participate at the discussions from Bologna in Universities, with open access.