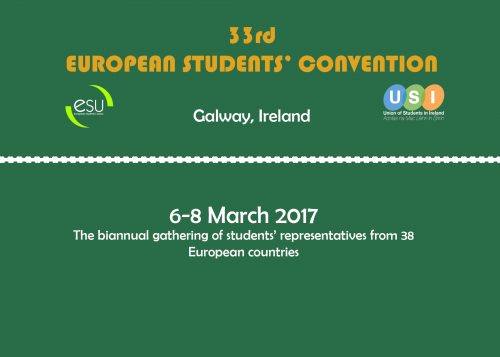 ESC 33: the next European Students’ Convention will take place in Ireland

The 33rd edition of the European Students’ Convention is to be held in less than two weeks, between 6-8 March. This time, the event will take place in Galway – a small city in the West of Ireland – and it will be hosted by the National University of Galway, Ireland (NUIG) – one of Ireland’s seven universities and the leading university in the promotion of the Irish language.

Students will be invited to discuss a few of the most crucial topics concerning higher education that are on Europe’s political agenda, with a focus on access to higher education and consequences of Brexit.

More information about the event will be added in the following days. For any questions, do not hesitate to contact us at esc33@esu-online.org.

The European Students’ Convention (ESC) is a biannual event organised by ESU where students’ representatives from the national unions of students from 38 different European countries, other stakeholders, experts and policy-makers have the opportunity to meet and discuss about the recent and future developments of higher education. Previous conventions have showed that they are an important and relevant contribution to higher education policies in Europe and a great meeting point for exchanging points of view between students, policy-makers and other stakeholders.

ESU usually organises the ESC in the member state holding the EU Presidency at that point of time, in order to create synergies with the country presidency’s priorities on education. The event is usually also included in the official agenda of the Presidency Semester and given great attention.