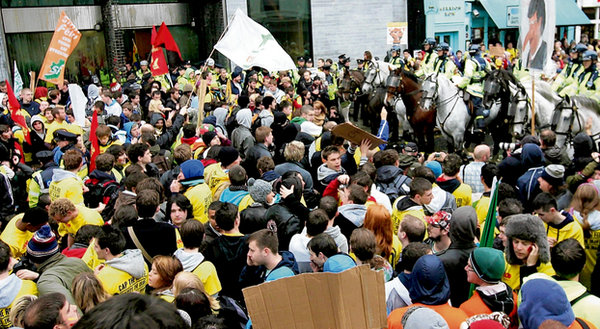 DUBLIN – An estimated 50,000 Irish students hit the streets of Dublin on 16 November in an attempt to avert a dramatic increase of their tuition fees. The Irish government is expected to announce an increase in their budget plans, on 7 December. Tuition fees in Ireland currently stand at 2,000 euro.

Chairperson of the European Students’ Union (ESU) Allan Päll said: “We strongly oppose this development which runs across students all over the European continent. Reduced public financing will lead to extra financial burdens for students. Eventually this will lead to less people being able to study. Is this really what the Irish government wants?”

Aengus Ó Maoláin, Education Officer from the Union of Students (USI) in Ireland –ESU member – said: “Before the general elections, the Labour Party and Fine Gael promised not to increase fees or cut grants. Thousands of students voted for these parties for that reason. And now, when the students are most in need, those same parties are turning their back on us”.

Dublin looks also set reduce the already inadequate funding for disadvantaged students by a measure of several percent. This happens in response to the European Central Bank’s extreme cost cutting measures imposed on Ireland after a hostile bailout by the EU-ECB-IMF troika in 2010.
— END —
Published: 16 November 2011
For more information, please contact: