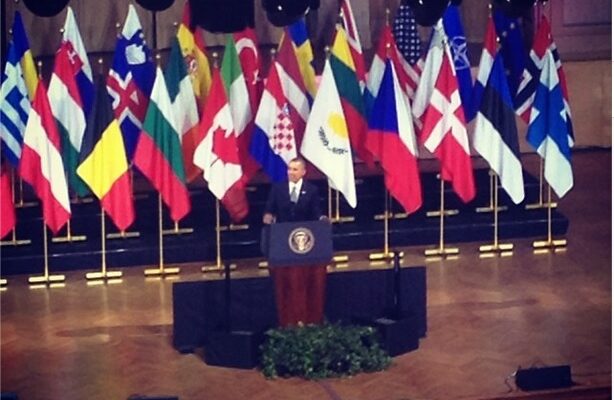 BRUSSELS – Elisabeth Gehrke and Fernando Miguel Galán Palomares, Vice-Chairpersons of the European Students’ Union (ESU), attended a gathering organised for Barack Obama, President of the United States of America, at the Centre of Fine Arts in Brussels, Belgium, on Wednesday 26 March. ESU was invited to this event at the courtesy of the European Youth Forum.

President Obama addressed the around two thousand guests in the form of a speech where he focused on the most recent developments in Ukraine. ESU has also been deeply concerned about the development in Ukraine for the past months, that started with massive anti-governmental protests in December. ESU has on numerous occasions published official statements on this issue, most recently by sending a letter to world leaders on 1 March when ESU heard about Russia’s intention to move military troops into Crimea.

President Obama said in his speech that he wanted the people of Ukraine to make their own decisions, like other free people around the world. ESU welcomes these words of President Obama as they reflect the vision that ESU has for the future of Ukrainians and the citizens’ rights to decide their own fate.

Although much of the speech was dedicated to Ukraine, President Obama also spoke about the cooperation between the United States of America and the European Union. This speech was according to President Obama directed at European youth. However, President Obama barely mentioned the negotiations on a Transatlantic Trade and Investment Partnership (TTIP) to ESU’s surprise.

ESU has together with Education International, the European Trade Union Committee (ETUCE) University and College Union of the United Kingdom (UCU) raised several concerns about the agreement. While President Obama is aiming at introducing educational reforms that he believes will do more for American students, ESU fears that the TTIP could damage the prospects of students in Europe.

“The fact that this historic agreement was not brought up was disconcerting. The speech was arguably more aimed towards the Russian federation than the young people of Europe. The European Students’ Union wants to stress again the importance of having a real democratic debate about the content of the TTIP,” says Elisabeth Gehrke.