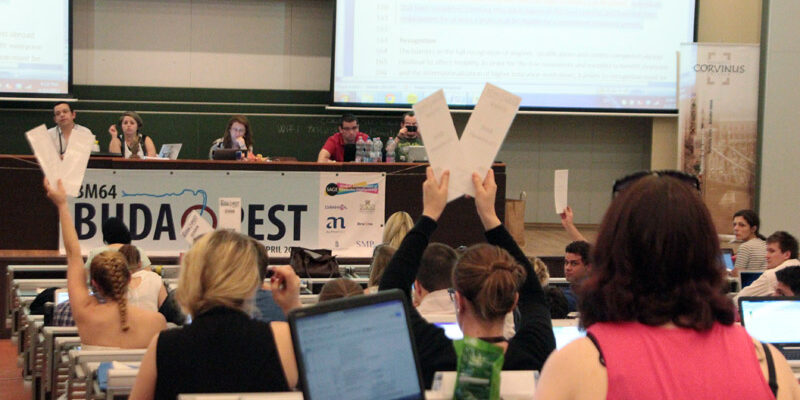 BUDAPEST – After a year of intensive work, the highest decision making body of the European Students Union (ESU) has discussed thoroughly and adopted four core policy papers on higher education.

These policy papers cover the social dimension and access, quality and structural reforms, mobility and internationalisation and financing, governance and commodification of higher education. The policy papers summarise the current policies and the ones that ESU has adopted in the past decades. They also tackle strategic issues, such as automatic recognition or multidimensional transparency tools, which defines clearly the mandate for the advocacy work done by ESU’s elected representatives. In addition to that, ESU’s members have endorsed a proposal for a Mobility Treaty, where European countries could agree on compensation mechanisms to support outgoing mobility.

These decisions were taken during the 64th Board Meeting of ESU held in Budapest, Hungary, from 26 to 28 April. Around 130 representatives of national student unions from all across Europe participated in this meeting that serves as ESU’s highest governing body and takes place every half a year.

More transparency at ESU’s Board Meetings

A year ago, ESU agreed on ambitious objectives to fully revise its standing policy to bring more clarity and coherence to the opinions of European students. The meeting in Budapest was therefore a key milestone in that journey.

“The ESU board members discussed a number of important issues, which can strengthen the organisation, like for example establishing a pool of ESU Trainers and facilitators pool and quality enhancement visits for ESU’s member unions. The ESU members also called for more transparency, such as live streaming during ESU’s Board Meetings,” says Karina Ufert, ESU’s Chairperson.

The Board Meetings of ESU also serve as a space for student representatives to learn about different national examples in higher education and to express solidarity among students in Europe. In this respect, the Board Meeting also adopted resolutions, for exampe in support of Swiss students opposing plans to introduce additional tuition fees for non-Swiss residents. Another idea, brought up by the Norwegian students’ union, called for the establishment of a European fund to support students in prosecution for civil activism, was strongly endorsed by the member unions.

All the documents that were approved at ESU’s 64th Board Meeting will soon be made available on ESU’s website.

Participants of the Board Meeting were also encouraged to participate in debates about the topics being discussed by using the hashtag #BM64 and were the tweets collected on Storify.

Around 130 student representatives took part in the Board Meeting in Budapest. Photo/HÖOK