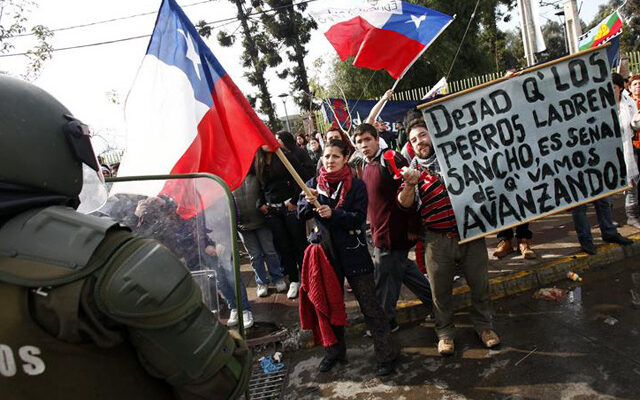 BUCHAREST – The European Students’ Union (ESU) is shocked that the Chilean students have faced threats, intimidation and violence during their fight for reforms in higher education. Allan Päll, Chairperson of ESU, said: “ESU believes in the rights of students to shape their future without being pressured, threatened or targeted with violence.”

Around 50.000 Chilean students took the streets of Santiago on 25 April, during which violence was again reported by the BBC. There have been serious cases of violence in the past demonstrations in Chile as well. Hence ESU’s Board adopted a support statement for the repressed students in Chile at their meeting in Bucharest on 23 April in which it urges the Chilean government to “protect their citizens and ensure these rights”.
In the past months, Chilean students have protested, debated and negotiated to achieve what rightfully should be theirs. ESU supports the rights of students to speak, debate and protest for their own beliefs, rights, ambitions and the existence of high quality public option education for all. These rights have all been denied to students in Chile hence ESU requests the immediate reinstatement of these rights.

Päll continued: “The methods used by the Chilean police during the demonstrations of students are unacceptable. There is clear evidence of students` rights being violated as the official report of The Humans Right’s Institute of Chile states.”

In August 2011, many Chilean students hit the streets to protest against the current situation in Chile. Public funding of higher education in Chile is below the OECD average. The burden of covering the full costs of studying, including tuition and living expenses, falls on students and their families who often cannot afford this. (see: http://esu-online.org/news/article/6001/524/).

The ESU statement concludes: “As representatives of the students from all over Europe we give our strongest support and our solidarity to the Chilean students”.

Annex: ESU Statement of Support for the Chilean student movement