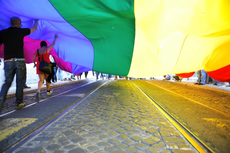 ESU calls for equality on day against homophobia

BRUSSELS – The International day Against Homophobia, which took place on 17 May, highlighted the fact that Europe is still divided as to accepting LGBTQ students (1) as an integrated part of European society. The European Students’ Union (ESU) thinks that efforts at making this division less obvious should be maintained or initiated where they do not yet exist as ESU strongly supports equal opportunities for all, regardless of their sexual orientation.

ESU’s Chairperson Bert Vandenkendelaere said: “Especially given the fact that the study period is a time when many LGBTQ students opt to express their sexual preference for the first time, it is crucial that there is sufficient support foreseen for those students. ESU holds the opinion that any form of discrimination in higher education institutions and amongst groups of students should be prevented and urges for respect and tolerance in the academic community.”

The development of LGBTQ rights in Europe has been progressive in the last two decades. However, a lot remains to be done as full equality is still not achieved, let alone being felt by those who need it most. For example, some scientists still claim homosexuality as a mental disorder, while in other European states LGBTQ-related issues are an entire taboo.