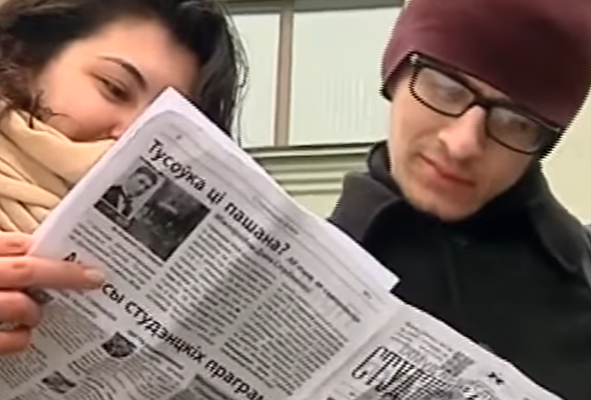 BSA: Students in Belarus speak up against challenges they face on campuses

Belarusian Students’ Association (BSA) relaunched its official newspaper called “Students’ Thought”  (Studentskaya Dumka). The newspaper was first published back in 1988, when BSA started fighting against the huge influence of the communist ideology in universities. Eventually, the last edition of the “Students’ Thought” came out in 2005 and hasn’t been published again until this year.

The new issue of the “Students’ thought”, published in 2016, covers news from the student society worldwide and gives its readers an insight from the actions taken on the International Students’ Day on November 17.

One of the activities consisted in an action organised by the Belarusian Students’ Association (BSA),  during which the new edition of the “Students’ Thought” and special signs for the International Student’s Day manifestations were distributed. Unfortunately, one of the activists was arrested, after the Belarusian State University’s security called the police. He was released two hours later. Still, the University security claimed that it is illegal to spread any kind of leaflets on the University territory.

As a reaction to this, the “#studentsilence” («#молчание студентов») flashmob-campaign was initiated, in an attempt to speak out about the problems and challenges students face in their campuses.

Many students from Minsk, Hrodna and Brest supported the campaign on the 17th of November by taking photos with their posters, and talking openly about their struggles that are often overlooked by universities.