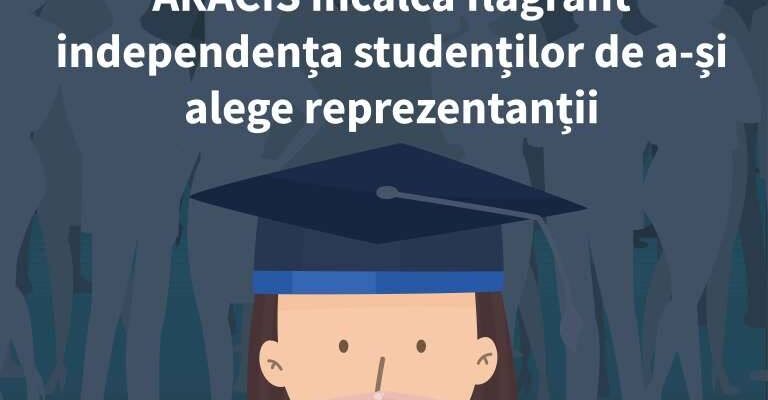 ‘Illegal and abusive’: Students in Romania condemn the working practices of ARACIS

The National Alliance of Students’ Organizations in Romania (ANOSR) is dismayed by the disdainful way in which ARACIS (the Romanian Agency for Quality Assurance in Higher Education) – led by the PhD prof. Iordan Petrescu, President of the Agency-  is implementing the external evaluation system for quality assurance of higher education in Romania. Illegal and superficial assessments, open attacks against students who are critical with the agency’s activity, are continuously taking place and undermining any opportunity of improvement of the quality in Romanian universities. ANOSR tried to use institutional levers to solve the problematic situations through internal discussions within the agency, but the way in which ARACIS reacted, determined us to bring these issues to the public attention.

At present, ARACIS carries out its basic activity, that of external quality assessment, in an illegal way, refusing to implement the provisions of Romanian Government Decision no. 915 of 14 December 2017, which adopted a new external quality assessment methodology. Although more than 9 months have passed since its adoption, ARACIS has not yet updated its internal tools used in the evaluation process (guides and evaluation sheets) in accordance with the new legal provisions, also carrying out the evaluation process on the basis of the methodology adopted by Decision of the Romanian Government no. 1418 of 2006, which is currently being abrogated. Thus, several hundred of evaluations of bachelor’s programs and Institutional assessments conducted by ARACIS during 2018 can be contested at any time, being conducted on the basis of a methodology that is no longer in force, thus outside the legal framework, which can bring serious problems to the students, as the validity of the studies they follow may be at any time questionable. The December 2017 update of the External Evaluation Methodology aimed to align national procedures for quality assurance with European standards in the field (adopted in May 2015). The fact that Romania has yet to implement, after more than three years, the new standards to be applied in the field of quality assurance, can lead to loss of confidence amongst the employers and the international institutions in the quality of the educational act carried out in the university system in Romania and even to the non-recognition of the studies followed, the students becoming victims of ARACIS laziness and may suffer important damages.

In addition, if we look at the way ARACIS is evaluating, we observe how quite often, Universities and their programmes are obtaining the maximum ratings that certify they meet the quality standards at a very high level. For example, in 2017, 70% of institutional ratings were qualified as having a “high degree of confidence” -meaning the highest level of quality. Regarding bachelor’s degree programmes, 95.25% of a total of 321 programmes evaluated in 2017 received the highest rating: “trust”. No programme under the accreditation process was considered to be inappropriate, while only 1.78% of the evaluated programmes had deficiencies in the opinion of the ARACIS evaluators (the qualificative “Limited Trust”). Although we should be glad to see that almost all Romanian study programmes and universities meet the high standards of quality, that is far from the truth. The experiences and discussions coming from the students we represent, show us that the real situation is quite different: many curricula or universities not fulfilling elementary quality indicators or flagrantly violating students’ rights. Thus, we consider that many of the ratings awarded by ARACIS as a result of the evaluations do not accurately reflect the reality on the ground; these are superficially granted, without being based on in-depth analyses. Unfortunately, the agency seems not to be aware of this fact, concluding that “the results of the evaluation of the bachelor’s degree programs and of the master’s degree studies have confirmed to a good extent an increase in the qualitative level”. Once again, this shows a huge gap between reality in the educational system and ARACIS’s work.

For almost five years, ARACIS refused to implement recommendations received from an international evaluation conducted by the European Association for Quality Assurance in Higher Education (ENQA) in 2013, entailing students in all the external evaluation processes-as stipulated by the European norms and practices in the field, although the Law on National Education no. 1/2011 ensures that students are full-fledged partners in all quality assurance processes (Article 192, paragraph (4)). It is only from the end of January 2018 and due to the numerous requests made by the students’ representatives, that students are involved in the evaluation of programmes from Universities. Before that date, they were only allowed to participate in institutional evaluations.

Moreover, yesterday (on 27 September 2018), the ARACIS Council violated a fundamental principle in the higher education system, breaking the principle of student independence in choosing its representatives. The delegates of the national student federations that were proposed to be part of the ARACIS Council were invalidated, although they met all the necessary eligibility criteria. According to Order no. 3572/2015 regarding the publication of the Methodology for nominating the representatives of the student federations, the representative of the employers’ union and the higher education syndicate, respectively, in the Council of the Romanian Agency for Quality Assurance in Higher Education, the attribution of the ARACIS Council was to validate the proposals of student representatives made by student federations, based on the eligibility criteria (Article 7), not being allowed to influence students’ decisions in any way. Instead, the ARACIS Council, rather than deciding strictly on compliance with the procedures, alluded to the personality of the candidates, invoking trivial and non-demonstrable reasons, such as the critical attitude of students towards ARACIS. Thus, the ARACIS Council decided to eliminate the potential critical voices that would have become members of this structure. This situation was brought to the attention of the European Students’ Union (ESU), which is worried about the actual situation in Romania, and discussions with other European actors in the area of ​​quality assurance in higher education will take place soon.

The poor quality of the training given to evaluators, the lack of follow-up processes on evaluations, the absence of transparency in the decision-making processes, a lack of strategic management and administrative inefficiency are just a few of the major problems faced by ARACIS which should be addressed urgently in order to provide efficient and in-depth external quality evaluation processes. Moreover, we recall that ARACIS is the structure responsible for the assessment of doctoral schools, a process which has never taken place since the adoption of the National Education Law in 2011; and that the assessments of the master’s fields will begin only this autumn, with more than 4 years of delay. These large delays show only the inefficiency of ARACIS in fulfilling its mission, contributing to the loss of trust of the beneficiaries in the university studies in Romania, but also to the decrease of their quality.

The fact that for the first time in ARACIS’ history such a huge deviation took place, whose author is the president of ARACIS, having the sole purpose of not accepting students’ critical opinions, makes us even more determined to continue the steps that we have initiated to improve the quality assessment and quality assurance system in higher education and, implicitly, to improve the quality of the educational processes and services that students in Romania benefit from. Thus, on 4 October 2018, ANOSR will hold a debate on how the quality assurance system in Romania should work and what the students could do in order to improve it.

In our opinion, a quality assurance agency plays a key role in the proper functioning of an education system and should be an example of professionalism, so we can no longer accept any negligence from ARACIS, being aware of the fact that every weak point of this institution automatically reflects on the direct beneficiaries of education: the students.

“We are upset that ANOSR’s attempts to improve the quality assurance system in Romanian universities are constantly struck by the opposition of ARACIS. This body must connect as quickly as possible to the actual realities of the Bologna Process and understand that the critical spirit of students in any perspective is necessary to ensure an efficient and healthy functioning of the external quality evaluation processes. ANOSR will not be intimidated by any attempt to intervene in the field of ARACIS students’ activity. ” – Petrişor-Laurenţiu ŢUCĂ, ANOSR president

“The European Students’ Union (ESU) has always advocated for the participation of students in the external quality assurance as partners and on an equal level. We are happy to see that all members of ENQA do recognize the important role of students in their QA procedures. Students should have an independent role at all levels, and if all criteria are met, they should be accepted. It is not up to the agency to decide about student representation.
The trust between the agency and students, a basis of QA activities, was dramatically harmed. All concerns raised by students need to be clarified. The case raises a question if the European Standards and Guidelines (ESG) are being met by ARACIS. Therefore, ESU expects its European partners to investigate if ARACIS complies with the ESGs. With a particular focus on students’ representation.” – Adam Gajek, ESU President