ZAGREB – The European Students’ Union (ESU) held a busy Board Meeting in Zagreb, Croatia, at the beginning of December, where representatives of national unions of students adopted thirteen external resolutions, three statements, a policy paper, a financial strategy, a plan of work for 2014 as well as other important documents.

The Board Meeting is organised twice a year in collaboration with the national unions of students that are members of ESU. This time, the Croatian Student Council (CSC) hosted this meeting and made sure that everything went smoothly.

The participants adopted a statement on the internationalisation of higher education that was based on the discussions that took place at the 26th European Students’ Convention, held in Kaunas, Lithuania, in September this year. The statement emphasises the need to include students in the decision making process when national and institutional strategies are designed for the internationalisation of higher education. Commenting on the European Commission’s communication for European Higher Education in the World, ESU appreciates that students’ voices are considered and looks forward to deepen its cooperation with the European Commission and other stakeholders in that work.

Another statement, adopted at the Board Meeting, condemns any aggressive acts against the lesbian, gay, bisexual, transgender and queer community (LGBTQ). The statement pays particular attention to legislations recently passed in Europe that undermine LGBTQ rights. ESU calls on all members of the Council of Europe to act on their obligations under the European Convention on Human Rights to protect LGBTQ people and to outlaw all discrimination, either by state or by individuals. ESU furthermore calls on the Council of Europe and the European Union to express their revulsion at the events in those countries which see fit to exploit and oppress their own citizens in this way. ESU finally calls on all governments in Europe to proactively fight to defend the rights of all their citizens to health, happiness, and the freedoms to assemble and self-expression.

The third statement is concerned with the European elections next spring and ESU’s campaign work for the elections, introducing a manifesto of ten articles that students want political candidates to fight for in their work at the European Parliament. This campaign will be launched officially at the beginning of next year under the name Vote For Education.

Then, the Board Meeting also adopted a policy paper, laying out in detail the views of students on the role that the European Union should play in higher education.

Lastly, the plan of work lists ESU’s actions and political priorities in the upcoming year. Additionally, a financial strategy from 2013 to 2015 was adopted, with ESU’s main priorities and working schedule in that respect.

Additionally, the Board Meeting adopted thirteen external resolutions, where student representatives express their opinions on various developments in higher education in Europe. Among the issues covered are demonstrations in Ukraine and Denmark, reforms in the Netherlands, net neutrality, academic integrity, investments in Romanian and Spanish education, housing supplements in Iceland, salary requirements for workers, LGBTQ rights and measures against the uprising of neo-Nazi and neo-Facist movements in Europe.

See a full list of the resolutions that were adopted here. 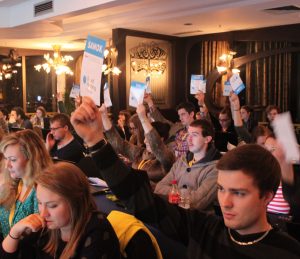 Delegates of national unions of students adopted dozens of documents during their meeting. Photo/ANSA