Students to EP leaders: Vote Euromaidan for the Sakharov Prize

BRUSSELS – The European Students’ Union (ESU) encourages leaders of political groups at the European Parliament to support the nomination of Euromaidan for the Sakharov Prize 2014. ESU believes Euromaidan is a symbol of the contribution that student movements made in the democratic transition that took place in Ukraine earlier this year.

Triggered by a brutal dispersal of student protesters on November 30, 2013, Euromaidan, a wave of civil protests in Kyiv, became catalyst in this pro-European democratic change. As a result, 104 protesters were killed during a violent confrontation with special military forces and police and Ukraine’s Crimean peninsula was occupied. However, Ukrainian people, among them many students and student activists, demonstrated to the entire world their commitment to European values of rule of law, human rights and democracy.

Historically, students have stood at the forefront of democracy. The Euromaidan movement in Ukraine was no different in this respect. This trend spreads across the globe today with students protesting in Hong Kong, Egypt, Serbia and Mexico. 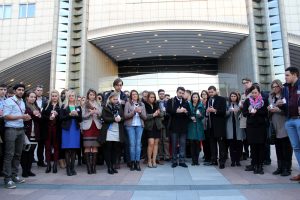 “By awarding the Euromaidan with the Sakharov Prize, the European Parliament would acknowledge the contribution of the student movement as a progressive force in this development in Ukraine and all around the world. We believe it will also serve as evidence for how important core European values such as human rights, democracy and rule of law are in the 21st century, while confronting severe challenges at Europe’s borders in the East,” says Elisabeth Gehrke, ESU’s Chairperson.

“ESU is proud to see student activists among the three Euromaidan representatives nominated for the Sakharov Prize 2014, especially since Shchepetylnykova represents Ukrainian students in ESU. Her bravery, leadership and commitment to democratic values are a true inspiration to us. We sincerely hope that leaders of political groups at the European Parliament will support this nomination,” emphasises Gehrke.

ESU has monitored events related to Euromaidan since the very beginning of the protests and adopted a resolution on the subject at ESU’s Board Meeting in Zagreb, Croatia, in December 2013. ESU also issued an appeal to Ukrainian authorities to stop violent acts against protesters and let the people of Crimea decide their own fate. In March 2014, more than one hundred student representatives honoured the victims of Euromaidan during a peaceful demonstration at the European Parliament in Brussels, Belgium.