Students must fight for a respect for human rights

BRUSSELS – Today is the Human Rights Day and the European Students’ Union (ESU) would like to use the opportunity to emphasise the need to fight for a respect for human rights. ESU joins the United Nations, the international community and all actors of the civil society in their efforts to shed light on the state of human rights around the world.

The General Assembly of the United Nations has proclaimed 10 December each year as the Human Rights Day. This day commemorates the adoption of the Universal Declaration of Human Rights in 1948. The declaration set “a common standard of achievement for all peoples and all nations” that should be reached by progressive measures. Although the Universal Declaration of Human rights is not a binding document, it set the tone for numerous human rights instruments that we hold today as  international standards.

The right to receive education

Article 26 of the Universal Declaration of Human Rights states that “everyone has the right to education”. Indeed, this human right has still many shortcomings and not everyone has access to education. It is a human right to receive education but no one would be able to do so without a respect for human rights in general.

ESU has given importance to human rights issues in its work and has modified its internal structure to create a position for a Coordinator for Human Rights and Solidarity. It is ESU’s duty to promote human rights, monitor the state of human rights within the student population and respond to any threats to human rights within and beyond the education sector. The rights to dignity, freedom of expression and assembly are only a few of the fundamental human rights essential to ensure a quality higher education for all students.

The Human Rights Day reminds students about those rights that are still being violated and cannot be taken for granted. As students, it is our responsibility to stand up for those rights, play our role as active citizens and define the society we want to evolve in.

Earlier this year, students in Armenia were threatened to be expelled from their higher education institution for partcipating in protests following a decision to raise tuition fees for the academic year 2013/2014. One student was arrested and fined for leading the protest, but released shortly after. For the past three weeks, Ukrainian students have also been denied their right to assemble and freely express themselves as the government has targeted students that have protested its decision to refuse to sign an Association Agreement with the European Union.

Other students live in very difficult conditions and are discrimitated against because they belong to certain communities. Their treatment leads to drop-outs, unsuccessful studies and even deaths in certain cases. ESU has been active in raising issues concerning migrants and students with an ethnic background as well as on LGBTQ students. ESU has made a toolkit aiming at better integrating student from a migrant or ethnic background and adopted a statement on LGBTQ rights at its Board Meeting in Zagreb, Croatia, at the beginning of December.

ESU calls on all students around the world to express their solidarity with students that do not enjoy their human rights and to continue their fight for human rights. As education is a public responsibility, ESU urges governments to make sure that all students have the right to education, as well as other human rights. 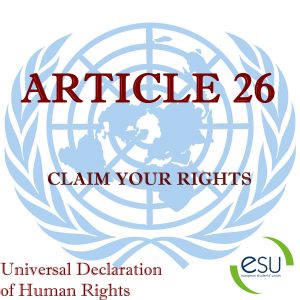