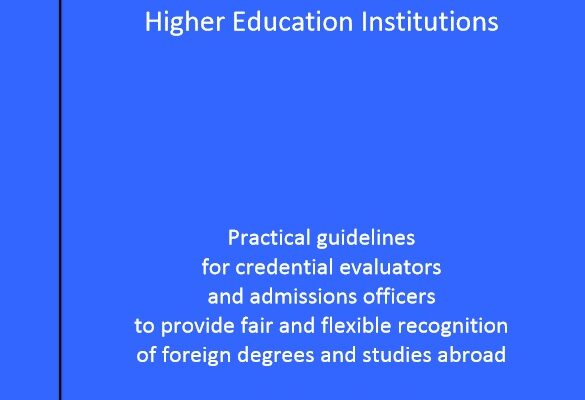 The second edition of the manual on European Recognition for Higher Education Institutions has been published on the STREAM platform.The ‘EAR HEI’ manual is based on the European Area of Recognition (EAR) manual published in 2012, which aimed to streamline recognition practices at the level of the ENIC-NARIC networks (the national information centres on recognition). This EAR manual was based on the Lisbon Recognition Convention and its subsidiary texts, and in addition on recommendations from projects, working groups and on publications.

The recommendations provide a standard to what is considered fair recognition in the European region. Moreover, the use of the EAR manual is recommended by the ministers of Higher Education of the European Higher Education Area (EHEA) in the Bologna Bucharest communiqué (April 2012). The EAR HEI manual is therefore not just another manual. It is the only European recognition manual for credential evaluators and admissions officers that presents commonly agreed upon best practice based on the Lisbon Recognition Convention (LRC).

The project team included experts from the European Student Union (ESU), the European University Association (EUA), the German Hochschulrektorenkonferenz (HRK), Tuning Educational Structures as well as NARICs from Poland, France, Lithuania, Ireland, Denmark, Latvia and The Netherlands (coordinator) and the President of the LRC Committee (2007 – 2013), the president of the ENIC network (2011-2013) and the special advisor from USNEI.