Send your postcard to a European candidate!

BRUSSELS – Representatives of national unions of students, stakeholders in higher education and other participants in the 27th European Students’ Convention were invited to write postcards to Members of the European Parliament or candidates for the European elections in May 2014.

This initiative was planned as part of the campaign Vote For Education, run by the European Students’ Union, where candidates for the elections are urged to pledge to a manifesto of ten points that national unions of students want them to work for. 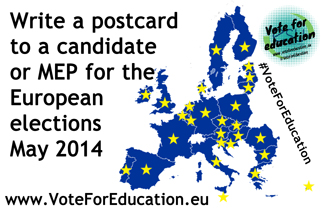 The campaign team has already collected confirmed signatures from 27 candidates for the elections, many who are current Members of the European Parliament. Most of the confirmed candidates are based in Finland and Slovakia with also signatories from Latvia, Lithuania, Netherlands and Malta. Fourteen more candidates have pledged to the manifesto but remain to be confirmed.

This campaign will be continued until after the European elections will have finished at the end of May, with the hope of collecting as many pledges as possible from a nationally diverse group of candidates.

Each participant in the European Students’ Convention in March was given a postcard where he could express his wishes and demands for the elections to a European candidate. ESU was happy that this initiative received a warm welcome and with the interest that the participants showed in writing directly to candidates of their interest. This event also raised awareness about the campaign in general, as the postcard urges candidates to go to the website of Vote For Education and to sign the manifesto online.

The postcard is now available on ESU’s website free for anyone to download and share. ESU encourages all students and supporters of the campaign, to print this postcard and send to candidates of their choice.

“After each candidate has made his pledge online on our website, a member of our campaign team gets in touch with that candidate to claim his confirmation. We are unfortunately still missing confirmation from several candidates that have pledged to the campaign. We have tried to get in touch with them, because we need their personal guarantee of support. They must also support the campaign publicly and share those statement with us, for example on their own websites, Facebook or Twitter. This is of course very busy time for all of us, but the pledges must be followed through and confirmed in order to be recognised on our website,” says Elin Blomqvist, the main coordinator of the campaign.

ESU has collected and published online a list of names of candidates that have already confirmed their support to the campaign publicly. An interactive map of the EU Member States has also been created, with an overview of the confirmed candidates of each country.

“We strongly encourage students to participate in these elections. Only by voting can they influence decisions that will affect their future and well-being. Students must get involved in these elections and make their voices heard. We surely hope that those demands will be taken into account in the work of the European Union in the next election term,” says Blomqvist.