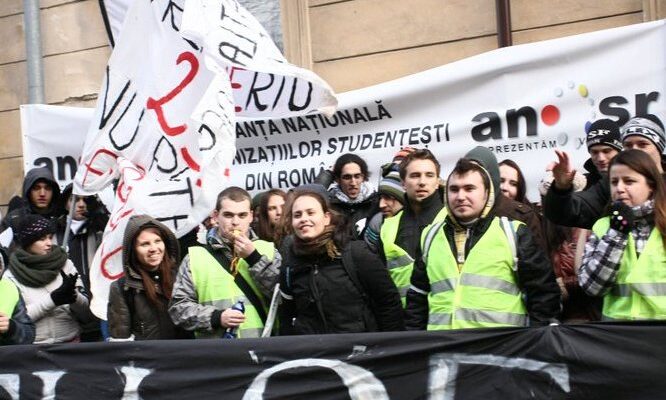 BUCHAREST – The Romanian national member of the European Students’ Union (ESU), the National Alliance of Student Organisations in Romania (ANOSR), won the fight for pushing for the adoption of a Student Statute, after more than five years of debates and negotiations. The document was adopted on 30 March by the Romanian Ministry of Education. It consists out of the rights and obligations of students and is a big step forward in ensuring the rights of students and increasing transparency with regard to their application.

Allan Päll, ESU Chairperson said: “This is great news for the students in Romania. We hope that this will lead to a fairer and more democratic higher education system in the Romania. Transparency and flexibility are also crucial in leading to a broadening of access to higher education. If fully implemented, it would allow for more possibilities and rights for people with a disadvantaged socioeconomic background and for physically impaired students.”

The Student Statute, or ‘Code of Student Rights and Obligations’ as it is officially named, is the first Romanian legal initiative written entirely by students. The long felt need for such a document first led to a draft in 2007. Student organisations took note of many abusive practices and decided to have them outlawed. Such practices increased students’ financial burden (i.e. by charging fees for releasing  diplomas, transcripts, certificates, by not providind free handbooks and access to study materials or charging students for use of university facilities), reduced their ability to influence decision making (by not providing easy access to decisions and regulations or even direct involvement of academics in student elections) and discriminated against those coming from disadvantaged socioeconomic background or impaired. Even though it seemed common sense for all those practices to be corrected, it was often not possible without a firm legal ground.

Daniela Alexe, ANOSR Chairperson said: “The adoption of the Student Statute is a step towards normality in Romanian Higher Education. The need for such a document was felt by students for a long time and it has finally been adopted, after numerous efforts, thus setting the ground for making the higher education system more student-centered. Now, work begins to ensure full implementation and, after the effects will be visible, further improvement.”

Debates and negotiations continued and in 2011 the new Romanian Law on Education stated that a Code of Student Rights and Obligations would be adopted by the Ministry of Education at the proposal of national level representatives of students. ANOSR’s Student Statute immediately became the draft document for that Code. Since then it passed through numerous debates and negotiations. ANOSR also pressured the Ministry of Education for a quicker and complete adoption. Media appearances, debates in unviersities, flash-mobs and support from the European Students’ Union  (ESU) were all used to persuade both the Ministry of Education and the academic communities of the importance of this document. The journey reached an ending point on 30 March when the document was finally adopted. Among the rights specified in the Statute, a list of the most important can found below (1).

(1)
– Transparency of fees and taxes demanded by universities for different services and outlawing taxes for most official documents released to students
– Transparency of all decisions and regulations adopted by decision making and executive bodies
– Free professional and educational guidance services and monitoring of learning in order to ensure proper integration of students from disadvantaged socio-economic backgrounds.
– Possibility for a number of grants to be allocated to candidates from disadvantaged socioeconomic background
– Right of physically impaired students to access and engage in learning, social and cultural activities within universities.
– Independence of student elections and introducing sanctions for academics that intervene
– Increased flexibility of studies, in terms of choice of courses and mobility
– Improved protection against discrimination and malpractice in exam grading
– Free access to handbooks and other available course materials.
– Free comprehensive student guides with important information