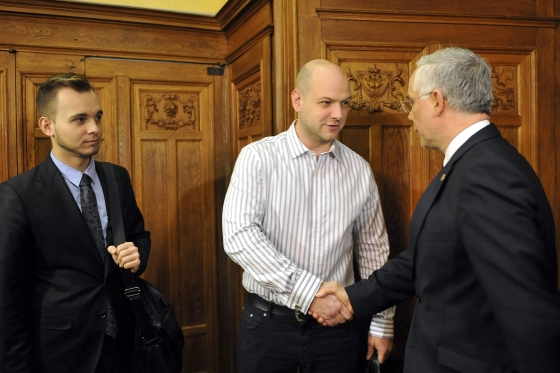 BUDAPEST – On 21 January, Zoltán Balogh, the Hungarian Minister for Human Resources, signed a partial agreement with representatives of the National Union of Students (HÖOK) regarding state-financed places in sixteen academic fields. This means that students entering their first year of studies such as law and economics will not have to pay tuition fees although the entrance requirements of credits will be higher than in other study areas.

The Hungarian government has furthermore promised to listen to the voices of students in relation to a controversial higher education reform. A roundtable on higher education policies has been formed for that purpose including students, rectors of universities and other organisations interested in the topic. Regular meetings will be held focusing on one highlighted issue at a time.

Thousands of students demonstrated against proposals to reform higher education in Hungary, introduced by the government in December last year. An official meeting was organised in the following on 22 December where the Minister and representatives of HÖOK reached an agreement, where the government offered the same number of state-funded student places as in 2011.

These negotiations between students and the government in Hungary are still on-going and will continue within the framework of the roundtable where the budget for higher education institutions will be debated. This is a very crucial issue to students as public investment in higher education has decreased significantly, or up to 50 percent in some areas in the last four years.

The Hungarian government still insists on withholding its policy of implementing student contracts, although it has shown willingness to make some changes to the number of years required to stay in Hungary after graduation. This does not satisfy the students however; who believe that freedom of movement is a fundamental right. Final results of those negotiations are expected to come clear in March.

Marcell Gaspár, international officer of HÖOK, says that Hungarian students have managed to achieve some of the most important goals set for the discussions. “In the beginning the government wanted to provide 10.000 state-financed student places, now this number is higher than 50.000. The best students will be able to study without paying tuition fees in all study fields, which is also a big achievement. We will be fully satisfied if the budget for higher education will set back to the level of the previous years and if the proposal for a student contract will be cancelled. Well, we might be optimistic, because there will be parliamentary elections in the spring in 2014, so hopefully most of our suggestions will be fully or partially accepted by the government by then,“ he says.

Karina Ufert, the Chairperson of the European Students´ Union, says: “I am proud of the success my fellow students in Hungary have managed to achieve. The pressure they are applying on the government shows well how students can make their voices heard and in fact have a direct impact on the policies of decision makers. This is an example of how we, students in Europe, can protect our right to education and stand against budget cuts,” she comments.

The European Students’ Union, headquartered in Brussels, is the umbrella organisation of 47 national unions of students from 39 European countries. ESU represents and promotes the educational, social, economical and cultural interests of students at the European level. Through its member unions, ESU represents over 11 million students in Europe. To find out more about ESU, follow us on Twitter @ESUtwt, check out our Facebook page or visit www.esu-online.org. ESU celebrates its 30th anniversary in 2012.