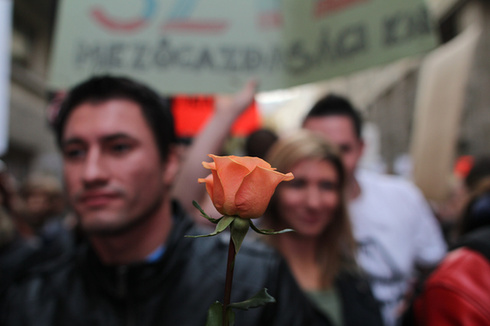 BUDAPEST –  October 27th, 2011 was a special day for all Hungarian students: the day when about 10.000 of them gathered in front of the Ministry of National Resources to demonstrate against the new law proposal on higher education.  The students were not only demonstrating against the idea of a student contract and the „hidden” tuition fees, but as well against the Minister of State for Education, Dr. Rózsa (Rose) Hoffmann. Thus, the rose was the symbol of the demonstration and it was present throughout the event in various forms: flowers thrown up in the air, jokes, songs, poems, etc.

The draft piece of legislation has been put together without any official consultation of HÖOK, the national union of Hungarian students, member of ESU (European Students Union). Allan Päll, ESU Chairperson, who attended the demonstration, said: “If Hungary demands students to sign contracts forcing them to work only in Hungary after graduation, then this is a direct restriction on the right to free movement, which is one of the cornerstones of the EU.” According to the proposal, students whose studies are funded by the government, has to sign contracts, stating that they will stay and work in Hungary 7-15 years after receiving their diploma. If they decide to leave, they would have to pay back the full costs of their education to the government.

There are also other issues to worry about: The number of students financed by the state will also be significantly reduced meaning that less students will have the chance to study without paying tuition fees. The rest of the students will have to pay the full costs of their studies, causing difficulties for many. The foreseen tuition fees will be two or three times more than what self-funded students pay today.

HÖOK decided to organise a demonstration against the proposal, that was barely communicated to them or other stakeholders, and who were left out of the consultations, even though they are considered to be the strategic partner of the government in higher educational issues. About 10.000 students from all over the country gathered in front of the Ministry to let their voice finally be heard and say NO to the proposal.

Dávid Nagy, president of HÖOK emphasized, that the world of today needs leaders who build upon the past, but who live in the present, and who consider students as partners when visioning the renewal of a high-quality higher educational system. Leaders, who are ready to act, are open towards students, and who are aware of the fact that future can not be built without youth.

He stated that these students do not want to leave their country: “We should not be chained down, we should be given opportunities that allow us to live and work at our homeland.”

Norwegian and Austrian student sent video messages for the demonstrating crowd. Allan Päll, chairman of ESU was present and gave a speech to represent the voice of European students on the matter. He called this new law proposal a landmark, but an ugly one, that would impoverish a generation both morally and economically. Päll also stated: “If students are forced to pay the state funding back if they decide to work abroad then this is as an indirect restriction, which also goes against the right to free movement. We are very curious to hear what Brussels thinks about these proposals and whether Hungary has already discussed any of these with them.”

The almost 2 hour long programme, throughout which many student leaders gave enthusiastic and motivating speeches, ended with the symbolic funeral of Hungarian Higher Education. Students marched with torchlights and brought the coffin up in front to the stage, where representatives of each university put a wreath on the coffin. Many rectors of Hungarian universities were present at the event as well, which had a significant meaning, as rectors have never before participated at student protests.

Nagy concluded: “We, Hungarian students are eagerly awaiting the upcoming reaction of the Ministry. We are not afraid to say NO again, if necessary. Nonetheless, it is comforting to know that Europe is with us.”