COPENHAGEN – The European Students’ Union (ESU) supports the massive protests that have been organised in Denmark against controversial reforms to the national grant system for students, affecting thousands of people depending on it.

On Wednesday 27 November, thousands of students from Copenhagen University, Aarhus University, Roskilde University and the University of Southern Denmark will take to the streets. They will demonstrate against plans to implement the so-called ‘Study Acceleration reform’, as has been introduced by the administration of Copenhagen University. This plan is a part of a national reform that is being implemented to the Danish grant system, which was passed last spring by all parties in the Danish parliament, except for one.

“We support the students’ protests against this outrageous reform, where students are forced to take courses they know they will not or cannot take and pass. If they do not comply with these measures, they may face expulsion. The Danish educational system is truly facing a huge threat with this reform,” says Rok Primozic, Chairperson of ESU.

The reform, which will come into effect in September 2014, will force all Danish students to enrol full time, equivalent to 60 ECTS pr. year, without the possibility of cancelling any of their exams. In the case where a student 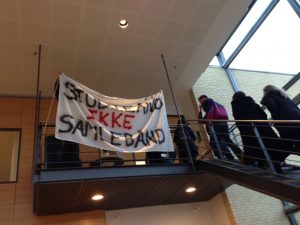 ails one exam, the student will automatically be enrolled for that course again in the following semester. Those courses will be added on top of the new 30 ECTS that the student is supposed to take each semester. Copenhagen University can furthermore expel students that pass fewer than 45 ECTS in a year and master students will not be given the possibility of having a leave of absence. “What the administration at Copenhagen University is proposing will have wide-spread consequences, leading most probably to the expulsion of more students and making it more difficult for them to complete their studies because of the strict requirements. This will have a tremendous impact on the students and their future prospects,” says Primozic

The Minister of Education in Denmark, Morten Østergaard, is arguing in favour of the reform, stating that Danish students are the only ones that do not have to study full time, all the time. Students in Denmark must step up, according to the Minister.

“This is definitely not the case. It is possible to study part time or slow down for a period of time in many countries in Europe without the danger of getting kicked out of university. This reform will ruin the quality of education in Denmark and the students’ own initiatives to improve their skills, such as with student jobs or internships, by studying abroad and other things that can delay students in completing their studies, but have a very positive effect on their employability,” Primozic stresses.

The Danish students have named the reform ‘Faster Out’, since they fear it will lead to massive amounts of students failing to complete their studies.

This is a poster created for the demonstration against the student support reforms.