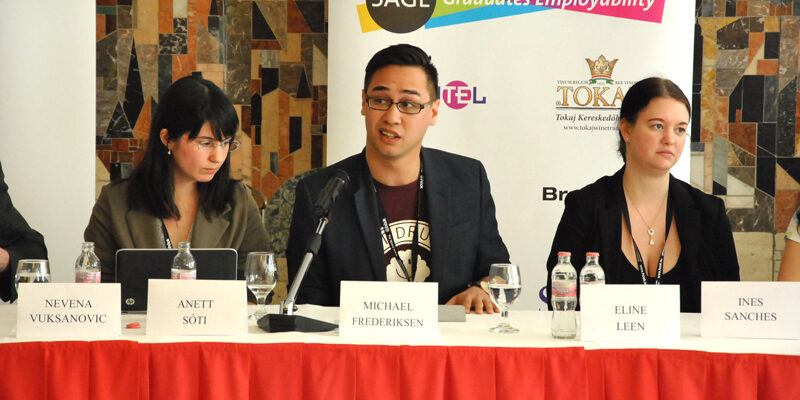 ESU close to the finishing line in SAGE research

BRUSSELS – The European Students’ Union (ESU) has since 2011 been running one of the biggest researches on the employability of graduates. The research team has now almost finished collecting all the data that is needed for the project. Once that data has been analysed, the results will be published in a book where different aspects and understandings of the employability concept will be examined from students’ point of view.

The ongoing survey consists of six chapters and investigates what expectations students have towards different skills, tools used in the Bologna Process in relation to employability, cooperation with stakeholders and best practices in different countries. Calls have been sent out to the national unions of students in Europe where they are asked to explain their opinions and official positions towards certain issues. Preliminary results of that process will be ready in August while the official study of the data will be launched in November in Zagreb, Croatia, at ESU’s 65th Board Meeting. This study will present the ways in which employability is defined on the national level and how those definitions contribute to the European level policy making. The first draft of the study will be presented at the research team and advisory board meetings, taking place in Brussels from 27 to 29 August, and reviewed by the eminent advisors of the project, Dr. Anne Corbett, Prof. Pavel Zgaga and Prof. Peter Maassen.

Important to consult students on employability

It was evident at the early stages of this research project that students had not been consulted on issues such as employability on the national and institutional level. Consequently, the concept of employability became one of the main tools used in the privatisation of higher education.

“Today, there are various concepts used for employability and while in some national contexts it is understood as a tool for gaining a short term employment and personal profit, in some other contexts it is considered to be a learning process, as the student’s ability to learn and to contribute to the society with the knowledge he or she has gained,” says Nevena Vuksanovic, a member of ESU’s Executive Committee and one of the main researchers in the project.

A new publication on the Modernisation Agenda

The first results of the project have already been collected in a publication called Bologna With Student Eyes 2012, a unique stocktaking report on implementation of the Bologna Process from students’ point of view. The second publication in line, the EU2020 Student Review, gathers case studies from several countries to investigate how the EU’s Modernisation Agenda has impacted national policies in higher education. This publication will be launched in September 2013, at the European Students’ Convention 26 in Kaunas, Lithuania. Last but not the least is the Handbook on Employability, a practical guide for ESU’s member unions on the concept of employability and its social responsibility.

“In order to bring employability back to its right path, the perspectives of students must be addressed and not ignored. It is time to shift the paradigm away from an individual profit oriented employability to a society oriented employability. We encourage people to follow our news and be the first ones to read the project findings when they will be presented in the autumn 2013 and follow the signs leading towards higher education that is considered to be a public good and public responsibility,” says Vuksanovic.

The European Students’ Union, headquartered in Brussels, is the umbrella organisation of 47 national unions of students from 39 European countries. ESU represents and promotes the educational, social, economical and cultural interests of students at the European level. Through its member unions, ESU represents over 11 million students in Europe. To find out more about ESU, follow us on Twitter @ESUtwt, check out or Facebook page or visit www.esu-online.org. ESU celebrated its 30th anniversary in 2012.