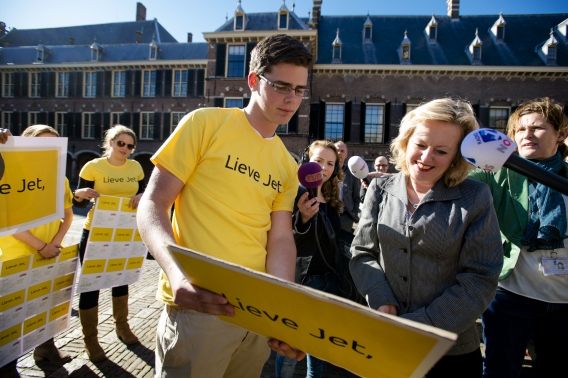 AMSTERDAM – A European court case against the Netherlands might hurt the interests of Dutch students that have been fighting fiercely against proposed changes to the country’s public transportation and student support system.

Student grants will be transformed into loans and other benefits abolished, such as free access to public transportation, due to reforms that the country’s government has justified as a reaction to the economic crisis. However, the national unions of students in the Netherlands, ISO and LSVb, have identified the flaws of that economic policy. They worry about the consequences it may have on the accessibility of higher education if free access to public transportation and the financial support will be abolished. It would place an unjustified debt on the shoulders of future generations. Study choices might also be negatively affected by changes to public transportation rules as students might become keener on choosing studies closer to their home areas rather than the ones they really want.

On June 30, the European Commission announced that it had decided to take the Netherlands to court because it believes that students from other EU/EEA countries do not enjoy the same benefits to public transports as Dutch students. The Court of Justice of the European Union has in the past year ruled in similar cases against Denmark and Luxembourg on the access of other EU nationals to student support.

“These recent examples from Denmark and Luxembourg have had worrying consequences. In both cases, the governments have said that they will need to react to the additional costs that the judgments will cause. We should aim at providing all students with grants and other support, no matter where they come from. However, that situation can easily be turned into grants for no one and thus have a negative effect on efforts to increase student mobility across Europe. European policy-makers have to be careful on which direction they are taking,” says Rok Primozic, Chairperson of the European Students’ Union (ESU).

National grants need to be portable

ESU published in January this year the findings of a three year research project on financing systems for higher education in Europe and student support, revealing that many countries had not made their student grant systems portable for studies in other countries.

“This also influences the choices and behaviour of students, as they search for the options that are most convenient to them. If we want to have real mobility and freedom of movement within the EU, all countries need to commit to the idea of increasing mobility by enabling students to use their national grants for study programmes abroad. That way we can prevent both a brain drain from one region to another and enhance solidarity among countries,” says Primozic.