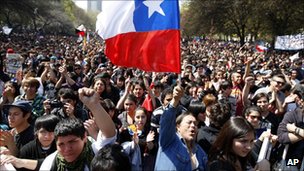 SANTIAGO – More than forty years after Pinochet’s military coup in Chile, which marked the beginning of the end of public education there, the country’s government wants to offer studies in higher education for free as of March 2016.

This announcement follows a decision that was taken early in December to increase corporate taxes, something that secured 8.2 billion USD extra in state revenues. “In March 2016 we will start to offer higher education for free now that we have the resources,” said Rodrigo Peñailillo, Chile’s Minister of Interior.

This move towards a free higher education system will mark the end of student-led protests dubbed “the Penguin Revolution” that broke out in 2006, where more than 800,000 students took to the streets and demanded free education. The students had minor victories, until the protests broke out once again in 2011 with university boycotts staged throughout the country. Now after nine years of hard advocacy work organised by Chilean students, they will finally be able to enjoy those changes that will bring prosperity to their society.

The European Students’ Union (ESU) is very pleased to see that Chilean authorities have returned to the just principle where education is considered to be a public good. That principle is highlighted in the first article of the Students’ Rights Charter, adopted in 2008. Free education is perhaps the best solution to stark inequalities of the Chilean society, which is the least equal among member states of the OECD.

ESU would also like to send its warmest congratulations to the students and student movement of Chile. Free education in Chile will no doubt be a global beacon of possibilities.