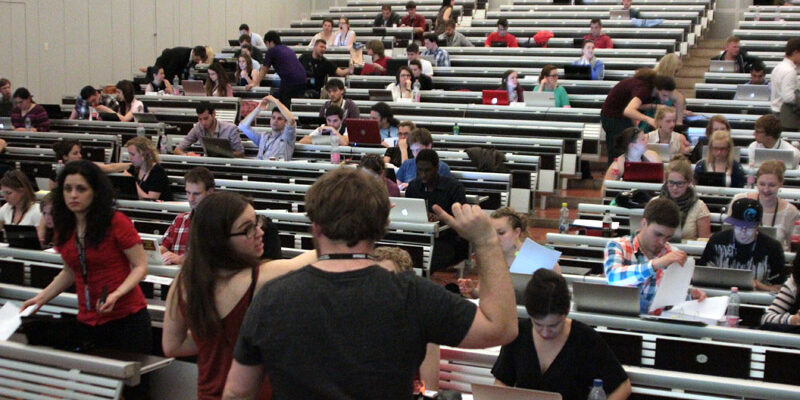 Alternatives to student loans must be considered

BUDAPEST – Students want more investments in the grant system for higher education in Europe much rather than to introduce a new loan scheme like the European Commission has proposed. They demand that the European Parliament and Council look at alternative measures on how student mobility can be enhanced instead of including the loan facility in the Erasmus for all programme starting in 2014.

“We strongly encourage the European Commission to make necessary arrangements to strengthen the current Erasmus grant scheme, rather than waste money on unpopular proposals, such as a loan scheme. On the other hand, the European Commission should encourage the Member States to introduce necessary changes in the legislation to allow full portability of national support services. In a time of debt crisis and austerity measures, the EU should not be encouraging young people to take on more debt,” says a resolution passed by 47 national unions of students in Europe during the 64th Board Meeting of the European Students Union (ESU) held in Budapest from 26 to 28 April.

Students clearly expressed their concerns about the loan scheme at the Board Meeting, a proposal they thought would be unfeasible and not reflecting the needs of students.

“We are appalled, that the proposal ignores the potential impact such a scheme can bring, such as raising the level of debt among young people or instigating a brain drain from less developed regions,” the resolution furthermore states.

A recent example from Malta shows that it is in fact possible to use the structural funds to support the study grant system even further. On Tuesday 30 April, the Maltese government launched a new Master Scholarship scheme financed by the European Social Fund programme 2007 to 2013, hoping to improve access of diverse social groups to higher education and the skill-set of workers.

Specific thematic objectives have been set for the European Social Fund in relation to higher education as part of the EU2020 strategy, meaning that the funds can be used to improve the quality, efficiency and openness of tertiary and equivalent education with a view to increasing participation and attainment costs. This includes measures to increase participation of under-represented groups, improving graduates transition to the labour market, strengthening education infrastructures and complementing the Erasmus for All programme after 2014.

“Malta is leading the way by setting an example of alternative measures that can be taken in order to improve access and mobility in higher education. Instead of offering loans, that only increase the debt level of students, it has decided to strengthen its scholarship system, by raising the budget to two million euros. This example from Malta shows us that there is a potential within the EU funds to support the grant system for higher education much more than has been done,” says Karina Ufert, Chairperson of ESU.