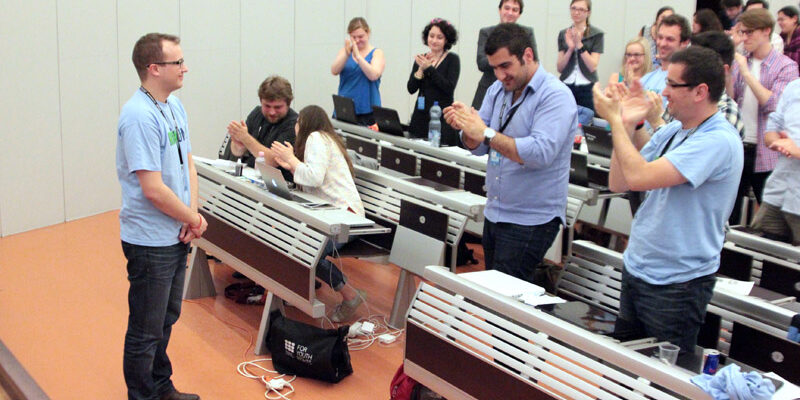 A new leadership for ESU has been elected

BUDAPEST – Rok Primozic, from Slovenia, has been elected as a new Chairperson of the European Students’ Union (ESU). Along with Primozic, two Vice-Chairpersons and seven Executive Commitee members were also chosen at the 64th Board Meeting of ESU taking place in Budapest, Hungary, from 26 to 28 April.

Around 130 delegates from 47 national unions of students from 39 countries participated in the meeting, but ESU represents more than 13.5 million students in Europe. The new elected representatives will start their one year mandate on 1 July 2013.

Rok Primozic is from Slovenia and holds a Bachelor degree in Law from University of Ljubljana, and has studied economics at the same university.  He has been a student representative for more than five years already, starting in Slovenia, where he served among others also as the acting president of Slovenian Student Union (ŠOS). He was a member of ESU’s Executive Committee in 2011/12 and a Vice-Chairperson in 2012/13. His work has been mainly focused on public responsibility and financing of higher education up till now.

“I expect this to be a very hard, but an interesting year. The situation of students in most of the European countries is not improving, on the opposite, it is getting worse. ESU has been at the forefront of the European student movement for the past thirty years and we intend to honour that tradition and demand even louder and fiercer than before that higher education must remain a public good and a public responsibility, and that governments need to treat higher education as an absolute priority, as this is the only way to a better society,” Primozic says when asked about his expectations for his term as a Chairperson.

For the position of the two Vice-Chairpersons, the Board elected Elisabeth Gehrke from Sweden and Fernando Miguel Galán Palomares from Spain.

Elisabeth Gehrke has a long history of student engagement, including being Vice-Chair of the Lund University Student Unions Association and at the National Union of Students in Sweden as well as being a member of ESU’s Executive Committee. She has for the past two years also held a position on the board of Lund University. Elisabeth is majoring in gender studies and has studied a myriad of subjects in social science and humanities including religion and philosophy. Elisabeth is a Swedish as well as an American citizen and could definitely be called a third culture kid. When she has free time she enjoys playing strategy games, having fun with her dog and riding horses. As for the future, Elisabeth has for now stopped making plans for it. She is very happy about her work and is focused on enjoying each moment.

Fernando Miguel Galán Palomares (Segovia, 1986) is a medical student at the University of Cantabria (Santander) and has been at the Università Degli Studi di Bari “Aldo Moro” (Bari, Italy), as a part of his ERASMUS exchange programme. Since he began his university education, Palomares has been involved in different levels of student representation, mainly in the field of Quality Assurance at internal and external levels. Currently he is member of the Executive Committee of ESU and a member of the Steering Committee of the Institutional Evaluation Programme of the EUA (European University Association).

The new people in the Executive Committee

For the positions of the seven Executive Committee members, the following student representatives were elected:

Changes to the Commission for Internal Audit

There were also elections for one of the three members of the Commission for Internal Audit. Claire Guichet from France was elected to the body that supervises the financial matters of ESU, joining Juuso Leivonen and Bert Vandenkendelaere.

Fernando Miguel Galán Palomares and Elisabeth Gehrke were elected as Vice-Chairs of ESU at the meeting. Photo/HÖOK