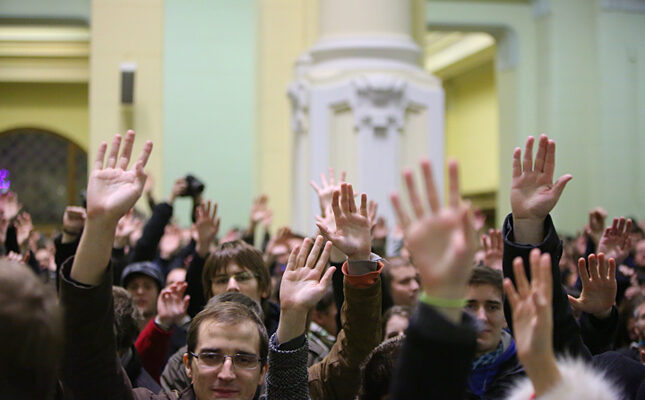 BUDAPEST – Hungarian students have not yet received any concrete support from the European Commission regarding their government‘s plans to install contracts obliging students to stay in the country following their graduation.

HÖOK, the national union of students in Hungary, entered negotiations with the Hungarian government after massive protests broke out in December because of plans to transform the country´s higher education system. Following these demonstrations the government backed partly away from its plans to cut the study places that were offered to students for free. However, the hotly debated issue of student contracts remains.

Earlier, the Hungarian government had showed willingness to make some adjustments to the original proposal that are far from being satisfying. Now, the government has proposed that students will have to work for a period of time equal to the one they spend on studying in Hungary. In case of a three year Bachelor study, this would mean three years of work. Originally, the government wanted students to work double their study time. The new offer also provides some discounts to people that cannot find jobs in Hungary after graduation. The government has offered lower interest rates for those people that would work for a shorter period of time than would be required from them and would therefore have to pay back their study costs.

“HÖOK decided to negotiate with the government on the student contract as we do not feel like it is right solution. We are disappointed that the European Commission has not made any concrete decision about this proposal for the past one and half years, even though the European Students‘ Union (ESU) had approached it. We stand against including the part on student contracts in the Hungarian constitution like has been proposed. That was in fact the reason for several smaller student demonstrations in Hungary taking place in February and March,” says Marcell Gáspár, international officer of HÖOK.

In addition to this, higher education institution have recently suffered from a severe financial shortage, which might lead to the bankruptcy of several of them if immediate actions will not be taken.

“We hope that the issue of funding higher education will be handled soon, because noone today in the sector knows if they will get the support promised by the government. If the institutions won’t get the support soon, many HE institutions will be unable to plan their budget for 2013, although these budget plans should be submitted before 31 March,” says Gáspár.

Representatives of HÖOK have actively participated in working groups set up by the government because of these issues, formed by the ministry, rectors and other stakeholders on several topics of higher education, such as financing, student contracts and the overall strategy for higher education.

Against freedom of movement

Karina Ufert, the Chairperson of ESU, supports the struggle of Hungarian students wholeheartedly. “The idea of obliging people to stay in one country goes against the freedom of movement, a core value of the European Union. It also damages any attempts to improve student mobility in Europe. This might also make people think twice before applying for a full degree in Hungary. Therefore, we urge the European Commission to step in,” Ufert says.

The European Students’ Union, headquartered in Brussels, is the umbrella organisation of 47 national unions of students from 39 European countries. ESU represents and promotes the educational, social, economical and cultural interests of students at the European level. Through its member unions, ESU represents over 11 million students in Europe. To find out more about ESU, follow us on Twitter @ESUtwt, check out our Facebook page or visit www.esu-online.org. ESU celebrates its 30th anniversary in 2012.