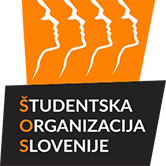 National Assembly of the Republic of Slovenia has unanimously adopted the act, written and lobbied by Študentska organizacija Slovenije, which will increase government investment in the social status of students by 40 million EUR per year. Slovenian high school pupils or students will on average receive an additional 250 EUR per year as a direct consequence of renewed legislation.

Gathering information on key issues of students, writing legislation and intensive lobbying for adoption of the act was a 3-and-a-half-year long project, run by three different consecutive presidents of ŠOS. It got the attention of the President of the Republic of Slovenia, the President of the National Council as well as President of the National Assembly, who embraced the act as his own and was also a formal sponsor through the legislative procedure. An intensive lobbying campaign with the government and representatives was run by ŠOS for the last year and a half and public relations campaign for the last 6 months.

Other solutions in the act include doubling investment into building and renewing student dormitories, abolishment of registration fees, improving procedures for combating sexual and other abuse in the higher education environment, higher subsidies for student meals, implementation of digital student ID and other minor changes in legislation, which was needed to ease students’ life.