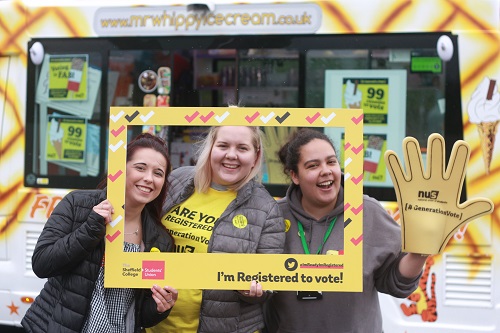 The recent UK general election provided a momentous opportunity for students and young people to cast their vote and play a crucial role in deciding the fate of key marginal seats.

NUS, along with students’ unions, ran voter registration drives, candidate hustings and ‘get the vote out’ initiatives across the UK, playing a huge role in getting over two million young people back on the electoral register after the process changed to individual registration in 2014.

As part of a ‘#GenerationVote Week of Action’, NUS took a vintage VW Camper and Ice-Cream van on tour visiting some key cities where the student vote could have a huge impact on the outcome of the election. Their mission – to urge students to put their future in their hands by registering on the spot!

Voter registration among 18-24-year-olds has been falling steadily since the seventies, however, the number of young voters leapt up by 20 per cent between the 2015 general election and the EU referendum.

750,000 more 18-year-olds – who were too young to have their say in the EU referendum – were able to vote on 8 June, finally getting their voices heard on Brexit.
NUS UK has two clear demands from the government. We want to see international students defended, welcomed and supported in our universities and colleges, and we want investment in education.

Over the past seven years funding for further and higher education has radically reduced. Young people are now leaving education with debt that will follow them into mid-life. Investing in education is an investment in society, it’s time we had policies and funding that recognised this.