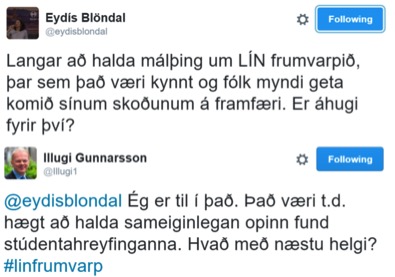 For years students in Iceland have had vested interest in the construction and functions of the Icelandic student loan fund (LÍN). The fund has often been a center of debate and, in fact, it was the reason behind the creation of our national union. In May, our Minister of Education, Illugi Gunnarsson, presented a new and highly anticipated bill, which had the purpose of reforming the fund. Many shared their opinions on social media and soon a very active conversation started on Twitter with the hash tag #LÍNFrumvarp.

The bill advocated many changes, the major one being the addition of a grant-system. The system is structured so that every single student gets a fixed monthly amount, should the student fulfill the given criteria. Other changes included elimination of income-related payments, decreased number of ETCS units loaned. While many celebrated these changes, others remained skeptical and argued that the changes benefitted mostly those who needed it the least and that challenged the fundamental role of the fund – the promotion of social equality. With major changes like these that affect multiple stakeholders in society, it is paramount to reach as much consensus as possible. That only happens with an open, informative and constructive dialogue between all relevant stakeholders.

Shortly after the presentation and some media frenzy one student posted on Twitter that she wanted there to be held a symposium, where relevant stakeholders could discuss the bill. After multiple re-tweets the message reached Illugi and he messaged back via Twitter that he was ready to be a part of such an event. In the wake of that LÍS started organizing the symposium, which was held at Reykjavík University on the 4th of June. Due to a short notice and recently finished final exams our hopes for a good attendance were not high. However, in the spirit of making a difference many students showed up and others took part online. First, the Minister gave 20-minute presentation and then he answered questions for over 2 hours. Students were able to ask him questions directly or over Twitter.

The exchanges between students and the minster were interesting. Students were also glad to get a chance to influence the decision-making process, although their participation should be considered natural. It was fascinating to witness the power of social media, Twitter in this case. With just one tweet that began trending within Iceland students were able to get the attention of the minster and start a real dialogue of consensus.