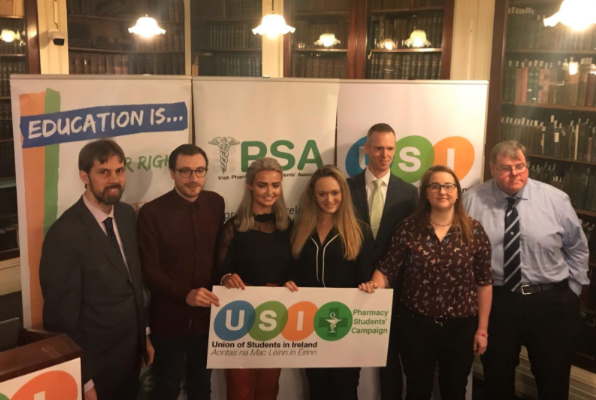 The Union of Students in Ireland launched on 24 January 2019 the Pharmacy Students’ Campaign Report: over 200 students rallied to express their anger at unpaid placements and increased fees.

In 2018, USI alongside the Irish Pharmacy Students’ Association (IPSA) launched a survey aimed at 4th-year Pharmacy students. These students were the first cohort to face the brunt of a ban on receiving payment for their labour. The ban was introduced by the pharmacy regulator, the Pharmaceutical Society of Ireland (PSI), and enforced by APPEL, the pharmacy placement management group. In Autumn 2019 these students will also be the first to face increased fees in the 5th year, ranging between €7,500 and €8,500.

“Our future pharmacists are being exploited with extortionate fees and unpaid labour. […] After the pharmacy programme changed in Ireland to an integrated model, pharmacy students are now feeling the significant financial and personal pressure of increased fees in their 5th year, while working on placement for a total of 12 months completely unpaid. – said Síona Cahill, President of USI.

The President of IPSA, Niamh Loughlin, a student in Trinity College Dublin added:

“It is unfair to expect students under the new MPharm programme to work what is essentially a full-time job without payment while paying fees up to €8,500’. The 2019 Pharmacy Students’ Campaign Report calls for an immediate end to this ban so that the next cohort of 4th and 5th years can be reassured that they do not face huge financial distress”