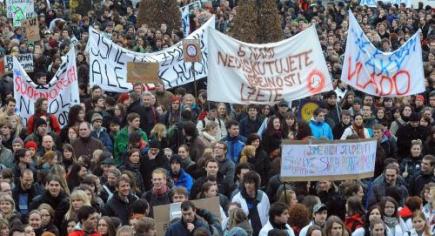 PRAGUE – The European Students’ Union (ESU) gives its strong support to the week of student protests in the Czech Republic, which take place from 27 February to 2 March all around the country. Czech students are protesting against two new law proposals: one on higher education and one on the introduction of tuition fees for students (1). The biggest students protest march will take place in Prague, on 29 February.

Allan Päll, Chair of ESU said: “Prague should bin these proposals immediately. All higher education institutions, including ESU’s Czech member, national union of students SKRVS, have rejected the proposals as they would restrict academic freedom and would make higher education less accessible as a result of the introduction of tuition fees.”
He added: “The Czech government should go back to the drawing table and re-draft its proposals. Without any support from the academic community and students, we simply do not understand that Prague still thinks this new law would lead to any good.”

The students already organised a few protests in Prague and Brno in the last two months in order to draw attention to the unpopular proposals. The agenda of the student protests and other activities that take place in all Czech university cities can be found on: http://www.nocuniverzit.cz.

Both students and academics strongly warn that the reform represented by the two proposals attacks the main principles of academia. Päll concluded: “The Czech Republic is, just like many other European countries, proposing major cuts in public spending on higher education during next three years. Together with the proposed legal changes, this will lead to a massive destabilisation of the Czech higher education system. Something no government on earth should want for itself.”