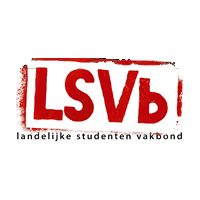 The Dutch Student Union (LSVb) is a federation of local student unions. We have 13 member unions across the country that form our General Assembly. As an official representative of all Dutch students towards the ministry and other relevant parties, we strive to improve the position of all the 660.000 students in the Netherlands (August 2013).

The LSVb was founded in 1983, when the local unions decided to join forces in order to gain more influence. The LSVb has proved itself ever since to be an organisation with a lot of knowledge and influence, which is not afraid of setting up a massive demonstration of playful actions in order to attract attention to the subject.

In the beginning, the LSVb was mostly orientated towards protest. Over the years, the union got as well involved in consultations with the government and higher education institutions and direct support of students, through e.g. legal advice. Nowadays, we are an organisation with a board of 5 people, about 15 part-time employees who are mostly students, and over a hundred volunteers (August 2013).

The LSVb stands for quality and accessibility of higher education for everyone who has the talent and motivation to study. The LSVb fights among others against high tuition fees, for a decent study allowance and good and affordable housing for students. The union offers free legal advice for students and supports student councils at universities and universities of applied science.